news & Updates ~ Echoes From The Holocaust 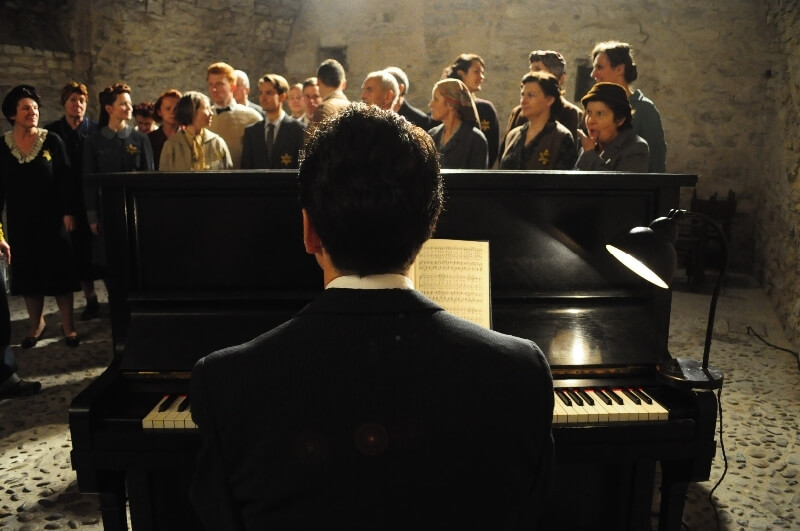 A re-enactment of Rafael Schachter at the piano rehearsing his fellow prisoners in Terezin in 1943 for the documentary film Defiant Requiem. The photo is provided courtesy of Partisan Pictures; Murry Sidlin, Creative Director.

Echoes From the Holocaust was composed by Joel Feigin, Professor of Composition, UC Santa Barbara, in 1993, commissioned by oboist Sara Lambert Bloom. The premiere was presented at a house concert in Cincinnati for the LaSalle Foundation, a series that Mrs Bloom co-directed after the retirement of the LaSalle Quartet. Henry Meyer played the viola with the composer at the keyboard for that performance on May 15, 1994.

See Chamber Music, Vol. 100, No 3, Fall 1993 for Henry Meyer: Profile of a Survivor, written by Mrs Bloom during her tenure as a trustee of that organization upon Professor Myer’s retirement from the faculty at the University of Cincinnati College Conservatory of Music where they were colleagues. His retirement and subsequent work with Isaac Stern for the Carnegie Hall Chamber Music Workshop where these mentors were devoted to teaching young musicians “not just what to play and how to play, but why,” coincided with Meyer’s breaking his silence on his harrowing near death experiences at Auschwitz, the loss of his entire family, and his journey to becoming a member of the first string quartet trained at the Juilliard School, leading to the LaSalle Quartet’s nearly 40-year residency at CCM. Mrs Bloom, a Christian, is a Charter Member of the United States Holocaust Memorial Museum; she served on the Faculty Council on Jewish Affairs at the University of Cincinnati and was the Music Director for a number of years for the university’s annual Holocaust Memorial.

Mrs Bloom joins violist Roberto Diaz, President and CEO of the Curtis Institute of Music, and pianist Michael Chertock, a member of the CCM faculty and pianist of the Cincinnati Symphony Orchestra, for this performance on her recital at the 23rd International Double Reed Society Conference in Bloomington, IN in August 1994, one of her last performances before taking early retirement two years later.

In an interview conducted by Elaine Kennedy for a performance on Live from Studio A on Cincinnati’s WGUC, the composer explained:

“Echoes From the Holocaust is a piece that Sara Lambert Bloom commissioned from me; when she asked me for a piece, she said that she wanted a piece scored for oboe, viola, and piano, which is a gorgeous combination–three of my favorite instruments. And when I asked her, ‘Well, do you want a cheery piece or a sad piece?’ she said something that often finds its way back to me. She said, ‘I want you not to push beyond the normal limits of the oboe technically so much as to push me emotionally to say something I’ve never said before through the oboe.’

“So my wife, Severine Neff who also teaches at the Conservatory, suggested that I do something related to the Holocaust.

“I’ve been running away from the Holocaust my entire life.

“So I said, ‘No–not at all–I can’t stand it. I don’t want to think about it. It’s too upsetting.’ But she insisted. And then Severine got this book of songs that were written during the Holocaust and I found myself–really against my will–fascinated.

“Finally intent on exploring this tragic realm of the human experience, I composed a kind of sonic memorial, confronting the horror of the subject with an ultra-lucid structure, built as a set of variations on an idealized Jewish ‘folksong’ inspired by features of two songs written by Holocaust victims. The first song is Makh Tsu Di Eygelekh (Close Your Little Eyes) by David Beyglman, who died in the gas chambers of Triblinka, and the second Babi Yar by Riva Boyarsky, a Soviet Jew. Both appear in We are Here: Songs of the Holocaust, compiled by Eleanor Mlotek and Malke Gottlieb, with a foreword by Elie Wiesel, and published by The Workmen’s Circle.

“The oboe states the song alone at the beginning of the piece, followed by fourteen variations and a freer coda. Some short free extensions between variations help to articulate the outlines of a fast-slow-fast structure, which in turn is flanked by a slow introduction and coda. At the still center of the piece, the song becomes a slow, solemn chorale for the piano alone, followed by an ornamental variation in E minor. Finally, after a climax, fragments of the song die slowly into silence.

“So that’s the story of the piece.”

Sara Bloom added these comments in 2013: “We all are so indebted to Joel Feigin for composing a moving work with some of the most tender moments ever written for the oboe–indeed for all three instruments–that, using the utter beauty of a folksong, give an ethereal voice to the people who endured this tragedy. Beyond melody, he also used imaginative gestures that express the terror and chaos, the anger and anguish along with noble echoes of hope and peace. At the end, the passage that piles up the oboe’s low-, middle-, and high-register Ds into a column of D, a vertical shaft of D, is to me the cry, the scream, the upstretched hand –followed by the heartbreaking horizontal statement of the low-register Gs. I felt myself not playing these notes but pushing these sounds out of my body, as one would not walk but push one’s feet towards the chamber, ending with the sound of doors snapping closed, echoing forever. In remembrance we humbly offer this performance with deep sorrow.”

“Art was their weapon; music their resistance.” We were not there to help but reminded by echoes, we can explore and discover within ourselves what our weapons are and what our resistance must be in the ongoing struggle. 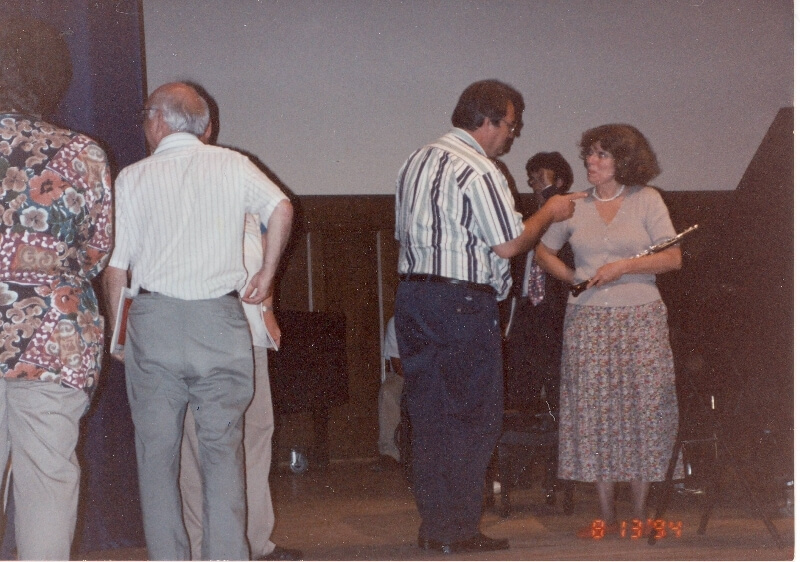 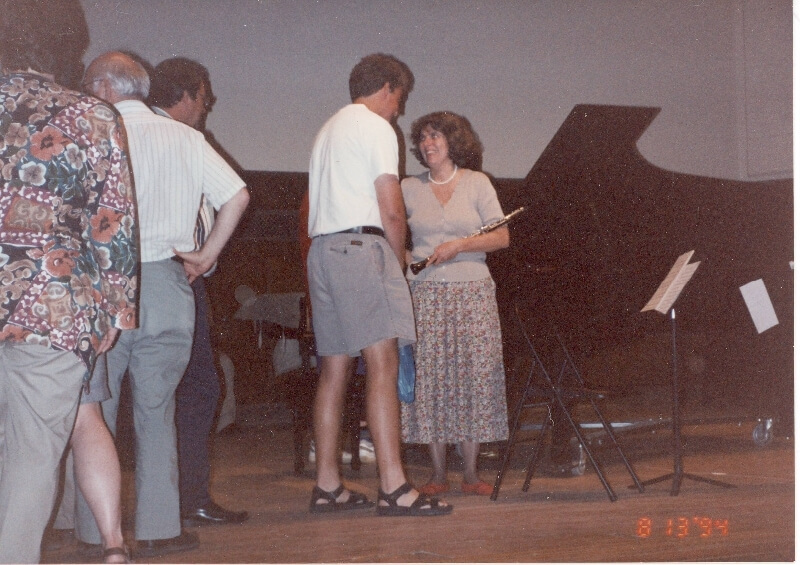 Robert Diaz and pianist Michael Chertok at the IDRS Conference in Bloomington IN on August 13, 1994

Henry Meyer at the Bloom home in Cincinnati c. 1992 with Otto and Katherine Leuning and Edward Nowacki 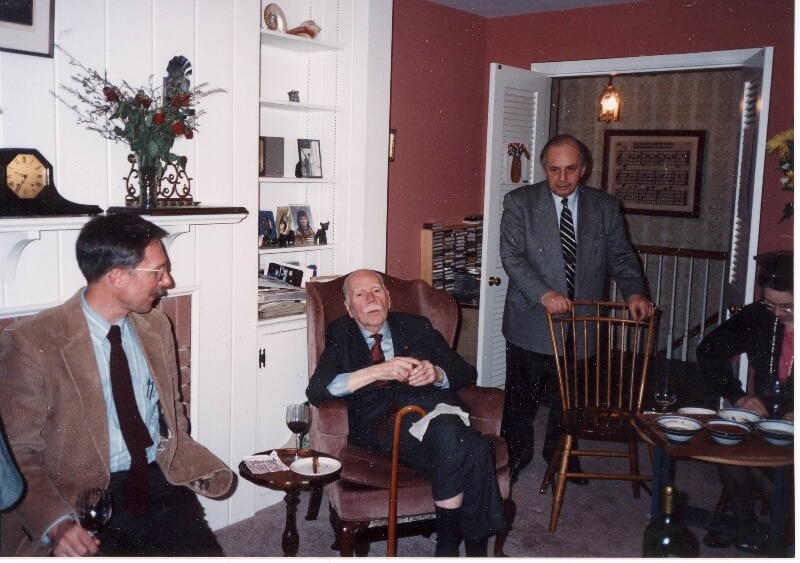